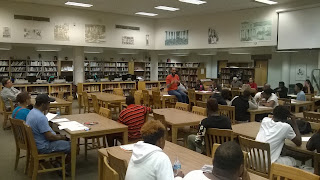 On Thursday September 3rd, Aspire and Achieve was at Oakland Technical High School with parents, students and administrators as the new school year kicked off.  Mr. Lamar Hancock’s class, African-American Male Achievement, is a unique program which is at the heart of Aspire and Achieve’s success.  Thursday was a night for the parents of the incoming freshman as well as other parents of students who are enrolled in the class to be introduced to AAMA, Lamar, the Program Director Jahi Torman, as well as resources like Aspire and Achieve.

The evening began with Lamar, the AAMA teacher, welcoming the students and their parents in the library at Oakland Tech.  The tables were filled and ears were open.  It was wonderful to hear the story of how AAMA has evolved into what it is today.  Lamar described Aspire and Achieve in such a positive way and even highlighted last school year’s visits to local colleges and universities.  Then Jesus Portillo and I were given the opportunity to present Aspire and Achieve.  Jesus did a wonderful job of detailing what we have done in the past and are planning to do in the future.  For me, this was a great chance to see Lamar and Jesus working together by opening doors for those who need them the most.  Our materials featuring Aspire and Achieve folders as well as flashy Holy Names University packets were handed out.  Students and parents got them and some signed up.  Success!

Later, after Lamar had the time to go into greater detail about his AAMA classes for both the freshman and sophomores with regards to the curriculum and requirements, Jesus invited Malik Diamond from the local non-profit Hip-Hop for Change to present.  Mr. Diamond, who is a hip-hop artist, activist and teacher who brings workshops into classrooms described Hip-Hop for Change in a passionate way that engaged the whole audience.  He posed a very interesting question about today’s blockbuster biopic Straight Outta Compton.  Aspire and Achieve is planning to schedule multiple workshops with Hip-Hop for Change during the 2015-16 school year.

Before the evening ended, we were all blessed to hear from two very important people from AAMA.  First was the father of a senior that had taken Lamar’s class.  The proud dad was eager to share with new parents who might be skeptical and encourage them to have faith in Lamar and the course.  Next, his son took the floor and shared his success story.  This was the best part of the evening because parents and more importantly the young men themselves (Kings as Lamar consistently calls them) could hear a real testimonial about what they are starting or continuing.  Most of the Kings there on Thursday were freshman, and when they heard the true tale about almost being expelled as a ninth grader, to choosing four year colleges and universities due to a GPA near 4, their eyes opened.  The young man who had been a skeptic and sat in the same position as so many of the freshman and sophomores gave both priceless social and academic advice.  And that advice was heard and understood.

Thanks to Mr. Lamar Hancock, Jesus Portillo, Malik Diamond, and Oakland Tech for a great night that will clear the path for more progress and success coming soon to a community near you!